It was another gorgeous day here in Big Sur. Beautiful surroundings where the mountains with lush vegetation meet the ocean and nature is so full and vibrant. Everyone feels magic in the air. The word “magic” you say and hear very often here. This is the land of ancient Indian tribes. Ancestors had chosen well the land to live on, and plenty was available. The joy for the eyes and ears, the most fertile land with a fresh source of water, shielded from the wind by the mountains and with the access to the ocean for fishing, surely it was a great choice! This land still till this time, hold its beauty and magic. This is where I met him.

It was already several years after a series of awakening experiences that started a landfall of changes in my life. From having a regular life of a middle-aged woman in New York City (maybe not so regular, but this is for another time), I found myself across the country, in the community called Esalen, working in the kitchen and living in the small room in a trailer that had sort of a hippy or a college dwelling feel. Every day I would walk to my work at 5 am through the forest in a fog, as in a fairytale.

An awakening like an inner revolution, and you really never know where life will take you after. It may be the same town, family, same job, or you will be taken for a ride across the world, meet people you need to meet, and find work that serves the living for the time being. This is how I ended up in Esalen; I was 43.

This period of unstable and changing relationships can be very uncomfortable, can evoke fears coming from feeling unknown, insecure, and vulnerable. This is a very good ground for continuing inquiry into a self-image that is constantly created, and especially in relations. We can’t heal the relationships that do not work anymore, but we can heal our mind, showing Him again and again how He creates identities, how He tries to run old programs, trying to engage us in the old dynamics.

I was coming back from work at night, and as I pulled into a driveway, I had to stop my car abruptly. In the headlights, I saw an animal in the air right in front of my eyes. I slammed on the brakes on a very high-grade driveway and kept my foot pressed down, afraid for the car to roll back. I only saw his muscular legs with hooves in the windshield. Probably it was a deer and seems like I saved his life, because right when I thought to take my foot from the breaks, the second animal after he jumped over the driveway, stopped on the side of the road. He turned his head toward me, and in the bright headlights, I saw the wild creature.

I never had an encounter with a big wild animal before, besides seeing them in a zoo. I didn’t even know what it was, it was big, and it was staring at me, and in the light-flooded darkness, his eyes were like two shining lasers. For a second, our eyes met, he paused, It felt as though he was making sure that I was looking into his eyes, then he disappeared into the darkness of the surrounding bushes. The wild, steady eyes, piercing into mine, this is what was with me the days that followed. “Mountain Lion - a strong medicine,” “Healing for the soul,” I was told by people here. A month later, I met him, the Native American Indian man who crossed my path like a mountain lion in a sudden, raw, healing encounter.

It was late afternoon before the sun starting to set down, and I was ready to go to dinner, I opened a door and stepped outside my room. There was a man there doing some painting work on the other rooms in my housing complex. I never saw him there before; it was much unexpected. I didn’t have time to really see him. I only remember I was almost blinded by the light outside, his all-white clothes, and a streak of white hair around his masculine dark face. Our eyes met in sudden intensity. For just a second, he paused, then not saying a single word, he turned his head away and disappeared into one of the rooms. There was a rawness in his eyes, something ancient I knew about already. “Danger,” I said to myself.
When I was a little girl, I learned to be afraid.

My mom and stepfather were passionate in their relationship, complete with jealousy and loud fights. They were young, just married, and like most other Russian people, they liked parties and vodka. Every time they would go to a party, I knew that when they come back, they would fight. They mostly yelled at each other with drunken jealousy about who looked at whom at the party, but sometimes I would hear some noises in the kitchen that would completely terrify me. I started to hide kitchen knives; I would crawl under the blanket and freeze in fear. One day I remember pledging myself that I would never — ever—live like my parents. This translated into the brain of a little girl into a program to never allow herself to fall in love with any man who was handsome, raw, and passionate like my stepfather was. His ancestors were Kazaki - the courageous warriors, the freedom people of Tzar’s Russia.
From that moment of making this unconscious decision as a little girl, my life took a certain course. All my friends, and later my boyfriends, husbands, were “safe.” They were mostly gentle, intellectual type. There was almost no passion in my relationships from my side; they were rather great friendships, based on good communication and security. Of course, occasionally, I would meet a man who would draw my attention and my being like a magnet, but one look in his direction would be enough to turn on an alarm in my head and execute the old protection mechanism. I would run, I would not engage, and if I do, the program will make sure to break this interest in a week or two, the most.

And this time was no different, the old program was still there, full force. I quickly got into my car and left. As I was driving, I saw the magic of this land right in front of my eyes: a shimmering double rainbow right above the narrow road and surrounding mountains in the bright pink sunset sky. The sight of it was so magnificent it took my attention for a second from confusion in my head from the encounter. I pulled out and got out of the car.

I was standing on the side of the road, in a long silk skirt, long hair streaming down my back, I was looking at the pink sky crossed by two rainbows, in awe. I still felt his gaze in my bones, I was deeply, cellularly excited, and deeply confused at the same time, though I wasn't consciously aware of it. Suddenly a beat-up white van also pulled in, the man came out from it and came toward me, “Magical sight,” he said, “May I hug you?” and he did before my mind offered his suggestions what to do to keep me safe. I have to say here, since all my life, I ran away from these kinds of encounters, that hug felt like something I never felt. It felt real. It felt life-giving. It felt safe. “Lift me!” I don’t know what made me say that, I wasn't really thinking. It just blurted out, but he didn’t hesitate, and I was floating high in the air in a split of a second.

My body was held tight and secure in the big arms of a strong man. It instantly recognized the visceral sense of being lovingly and securely held, as it was held in my mother’s arms as a baby, or as a toddler, held by my father on his shoulders. I was stunned by the feeling of freedom and safety at the same time. He held me, seemed like for a long time, because I started to feel awkward in the hands of a stranger, and the mind would give some suggestions: “This is enough,” “He is probably tired,” “This is weird,” “I am too heavy,” and I would try to wiggle my body down. He would move his arms just a bit, to shift me back up a couple of inches, and would hold even stronger. He didn’t say a word, and me too, it was as our systems were synchronizing: mine was fighting and yielding at the same time, and his was patiently affirming, and at the end, the realness took over the old pledge of the six years old. The healing began. 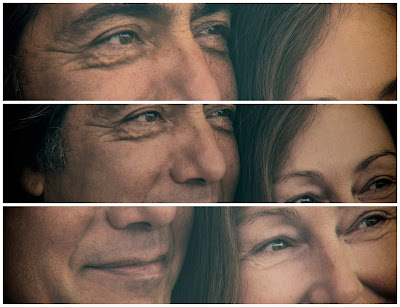