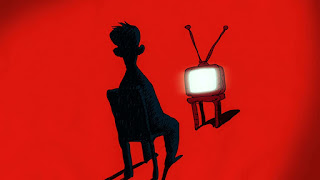 I think what helped me in life is that in most of my life I didn't watch TV. We had no TV when I was a child, I don't remember watching it at all, my family was poor, I was born on a unpaved street on the outskirts of a very small town in Ukraine. When me and Anthony were in Budapest, I noticed very similar air, just like in Ukraine, so I looked on the map how far it is from the town I was born, and was surprised that it was not that far, you can drive by car in one day. When I was looking at the map, I did the google zoom into the street and actually found the very house I was born in, I couldn't believe it had the same window shutters and still the same unpaved road!
At about 11 we went to live in East Germany where my parents got TV left from the previously stationed military family in the house, but the programs were in Germain, I did not understand and did not watch it, mostly spent my time in school and with my friends outside.
At 16 we came back to Russia and had to live 2 years in a military dormitories where families had a room to live in and a dormitory kitchen and a common room for everyone. After dinner people would gather around one TV in a common room and watch a movie. I couldn't stand to sit in a packed, hot room smelled with dirty socks of Russian Army officers, so I again, spent my time either with friends or reading.
By 18 my parents finally got their own apartment and eventually bought a TV. By that time I was more interested in guys, dating, and teen groups to hang out, not to sit with my parents and listen their commentaries about events on news. But I would watch sometimes soccer, iceskating main championships, music, fairytales, animal and travel around the world programs.
At 22 I immigrated to USA, didn't speak English to watch TV for long time, immersed myself in caring for my newborn baby, study and into reading because I could use electronic translator with books.
In my 30th we got TV, mostly to watch DVDs through VCR, since I don't remember watching anything else, except couple of seasons of American Idol, Batchelor and Apprentice, have to say it was super interesting

And that was probably my biggest exposure to the television.
World-wide news came into my life fairly recently, after 40, through computer. But I never developed the need for news or any other programs on TV, and I am so happy about it.
Yesterday we watched the movie "Plandemic". It made a big impression on me mostly just uncovering how deep the conditioning through mass media and Google goes, how it is used as a sophisticated filter for information. When I say to people that I do not really read articles, watch news, not interested in numbers from government agencies, I am not kidding, I don't. I have very short attention span for this type of reading or videos, very rarely when I read something to the end or watch, like yesterday with this video Plandemic. And even it was interesting, I drifted in the middle of it. In all the honestly, my mind doesn't need something in it's entirety, it picks up what it needs very quickly and that's enough information, and I trust this feature.
If you familiar with Human Design, I was surprised to discover that I don't have any 1st lines in my design (I-ching energy lines describing the propensities of the mind). 1st line is about investigation, digging into available information, starting from basics, study from the beginning. Some have this energy very strongly in them, some less stronger, and it will be right for people to dig into information before making conclusions, but I have none of 1st lines. I don't need to study anything starting from basics, I can grasp the essence from any entry point. This was such a revelation for me some years ago, almost a relief of what I already knew and intuitively lived, but always felt inferior to those learned individuals who operate with data and know facts. Especially in Russia we overemphasized higher education and those with degrees wold definitely look down to those without, so most of us got degrees in doesn't matter what, just not to be left behind as stupid. Mine was Metallurgical Engineering, believe it or not!
So why I am so strong on my page about masks and other BS I see? Not because I follow news, numbers, hundreds of articles and videos, no, I have no interest, energy and focus for that. I say what I see and feel in myself, it is very raw and very innocent, and when people come back and say "You don't read information, it is a slippery slope" or "Aha, you don't read, then you can't know what is true" - these are written by people who have no idea how my mind operates, and they see it from their own perspective, having probably highly intellectual, analytical propensities of the mind to get information from the linguistic sources.
I live, observe, feel. Sometimes I do get visions, but I don't trust those, since they can be as conditioned as anything else. Sometimes I read and watch, but this is not my main source of information.
So anyways, I just wanted to say, if you want me to present you facts that prove your facts wrong, this is not my thing. Even if I post some facts sometimes, its mostly for people who need to read or watch to know. Please understand if you want me to debate anything, I am unable. Then you can conclude something like someone very popular in a spiritual scene did: "Aha, if you don't read and watch then you can't know what is true". Do whatever you want, but for me this would point that we are not on the same fractal, you don't need my insight, you will never take from me because your mind need factual information that I don't have, and therefore it is more kinder for us to part.
Have a greatest day today!
Love, Elena
Like
Comment
Share
Posted by Elena Nezhinsky