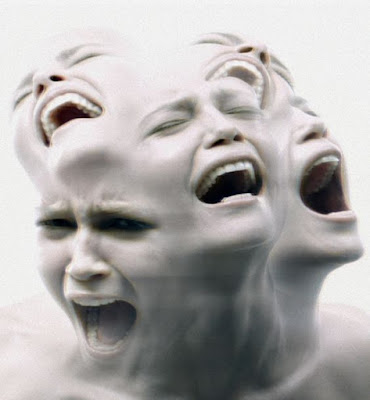 Yes, it is that serious!   And some of you who know it already, will appreciate I verbalised it ! Here is why this situation may lead to serious physical condition or mental disorder, in some cases, death, either from deteriorating health, or suicide (this happened to several non-duality teachers, and we have no count for those spiritual aspirants who left unnoticed)

Conforming, suppression, compromising are contraction of energy.
Awakening experience evoke full expansion of energy.
It is unresolvable inner conflict.  You can't un-do awakening, and contraction can't sustain itself in the presence of expansion.  The longer this goes, more intense tag of war between energies, and one day it might blow up as an erupting volcano of psychiatric episode or serious illness.

Post awakening in the conforming character leads to deep depression, hiding, wanting to end life, wanting life to end...this is as much fire inside as it gets, suppressed!

Anyone who used to conform, compromise all their life to partners, family, society, to anyone who has confidence, authority, or whoever it happens in your case...it is important that you carefully read this.
These tendencies of the character will not magically disappear, this is major shadow work that has to be done.

Third, you decide to observe the conforming behaviour.

Fourth, you say, scream, yell NO to it!

Fifth, you keep observing and engage in the conforming character more consciously in a situations that you can't be authentic yet.  The more you see the conforming role of the character, the more clarity of who you are and what you are living in the moment will be, the more courage and strength will accumulate for the final release.

Six, this is an alchemical work of the spirit itself, we can't calculate how to release conforming role, it may happen in confrontation with your parents, partner, boss, anyone with whom you kept the role going.  Suddenly you got enough of wearing it and you rip if off.

The other party will probably not understand what is going on.  They used to you in a role, they will keep addressing you as you are in a role, they would be totally confused by your metamorphosis, they will try to undermine it in different ways, just to put you back in your usual conforming role, they will not believe that what you were before were not you, they will not accept your new face, they might shut all the doors on you... everything and all of it together -worth it.  The freedom that comes from authenticity that was covered by a conforming role is that freedom you are looking for!

The energy release from letting go of conforming role is absolutely freeing and fully support the authenticity, creativity, wellbeing.  The release can be immediate, in parts, or overtime.   After release of the role you can be fully alined with who you are, beyond sporadic moments of recognition, you are awake in life, effortlessly, there is no internal conflict, the roles in life are more holistic and beneficial to wellbeing and clarity of the mind.

You are awake and you are free.  You experience peace in your being and renewed joy from meeting life. This is trade off for loosing those who were with you because they were attracted to you as the role, not authentic you.  But now you will meet new ones, those who will support you naturally, because they simply like your true face.

At the end I say that expecting understanding what actually happened to you, is asking for too much from those who only want to see your old role as you. Leave them alone. It's already shocking enough for them to have their idea of you be shuttered, or even a little questioned. Have a compassion and understanding that it is also not easy for them to let go of their idea of you. It may change one day, and you may meet in the authenticity, and it might be very healing experience for both of you.