I felt this letter from K ( http://completehumanity.blogspot.com/2011/07/ive-been-meditating-my-ass-off-for-25.html)
needs it's own post. The guy didn't hold freedom to himself (if that's even possible!:)), he went ahead and liberated his niece, on the spot. Such a gift! So here it is:
Hi, Elena
I'm back from visiting my niece, and I've had some time to reflect over the situation.

Thoughts are still telling me that this can't be it and that there's gotta be more. Why the fuck are people hell-bent on getting enlightened?  Only because enlightenment is something they dream into existence.  And when that dream bubble burst after 25 years, as in my case, there's just “WTF?” left.  However:

If enlightenment is defined as seeing that the I doesn't exist as a separate entity, then I am enlightened.  I wonder who came up with that word in first place — certainly not an enlightened person.  “Annihilated” is more descriptive, don't you think?  “Liberated” is ok, so is Jed McKenna's “truth realized”. Still, those words had an air of splendor to me before.  More dreaming.  It's really so simple, there's nothing to it.  I would feel like a conman if I were to hold satsangs about this and charge money for it.  McKenna wrote 3 fucking BOOKS (4 if you include the notebook) about the subject when 3 WORDS would suffice: I DON'T EXIST (let's make it 4 and add a DAMMIT!).  But I guess that book wouldn't become a bestseller — and I would probably be sued for plagiarism from hordes of Ruthless Truth'ers.

The search is over.  But instead of being at the end of the road, at the goal, it's more like: this is where the journey starts for real, this is the beginning, not the end.  For the past 25 years I've been living a very restricted life, walked a very narrow line, because I wanted to obtain just this: enlightenment.  Had I known before what enlightenment is I wouldn't have gone for it.  I imprisoned myself for 25 years to obtain freedom now? How sick is that!?!


I told you I was visiting my niece in another part of the country.  She's a very bright and very sweet girl, 23'ish y.o.  Almost immediately I sensed that she had embarked on the self-development journey.  She is borrowing books on the subject from the library (I'm glad she hasn't yet made her own spiritual library like I did!) and she is actively looking for hands-on courses in self-development.  Well, WAS, because: 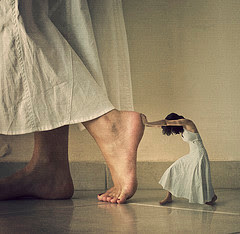 Elena, I couldn't see that sweet girl embarking on the same stupid journey I went on 25 years ago.  Imprison herself and waste a lot of time and money.
Sooner or later she would get to hear about enlightenment, and she would want it as much as I did, and only god knows for how many years she would be trapped, raped and robbed.  So when we reached the last few hours of my visit I gently told her “My dear, I sense that you are keen on self development.  Before you embark on that journey, please do me a favor and find out what ‘I’ is — well, we can do it right away, if you want, it won't take long”, and she was all in.  We started by establishing what is real and what is unreal (the unicorn lesson), and she grabbed that immediately, including that some labels describe real things, other labels describe imaginary things. I then asked her to locate the ‘I’ that is seemingly having all these experiences, and after a few minutes she said “I can't find anything”. When the implications of this discovery hit her she had a mild panic attack, mostly because, as she said: “Dammit, now everything has been destroyed!” and a few minutes later: “What a pity I paid that conman (a self-development coach) $60 for a consultation the other day, those money are just wasted!” (she's a student, and she is somewhat short of money).  No need to say that she has canceled the self-development journey she'd booked a seat for, and now she has to sort out the implications, much like myself.  I'll stay in touch with her, of course, to make sure she's alright — it was really a blow to her, and it came unexpectedly — but I'm glad she's not going to waste precious years of her valuable youth imprisoning herself for no reason.

So Elena, here we are.  I send you much warmth for helping me out on this. Being an old geezer, I had expected this to last for months on end, if I had made it at all, and then all it took was a short look.  The precise turning point was when I watched that movie and ate that cracker, and I saw/realized that there was watching and tasting but no seer and taster.

I don't know where life is going now, and it doesn't really matter.  Old stuff is surfacing from the depth and structures are being reorganized. I will definitely not be holding satsangs, and I probably won't be writing books either (other than the one titled “I Don't Exist” with one single word inside: DAMMIT!).  I'm also not sure that I will unsolicited recommend people to become ‘enlightened’, but it makes good sense to approach people who are about to imprison themselves in the self development trap.  We'll see where life goes…

Thanks again, Elena.
Much love,
K

This photo came a day later:

A strange coincidence/synchronicity happened when I sat with my niece after she'd realized the truth:

The transport company in her city are re-routing all the buses on 8th August.  To help the citizens find the new bus routes the company has created a website and they are advertising on every single bus in the city.  Lots of different ads.

As we sat there, waiting for my train back to Copenhagen, a bus with the ad “Hvor pokker er jeg?” stopped right next to where we sat.  It literally means “Where the heck am I?”.  Very appropriate, huh? ;)